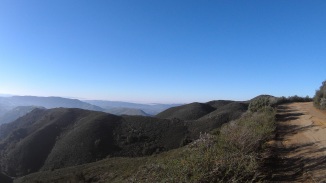 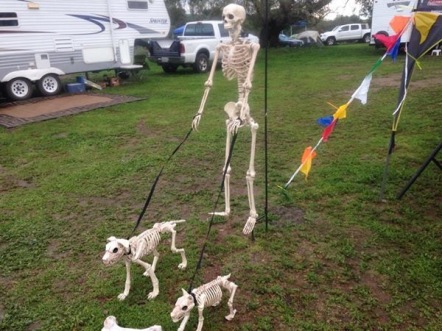 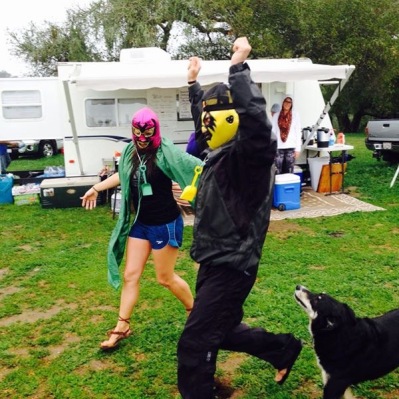 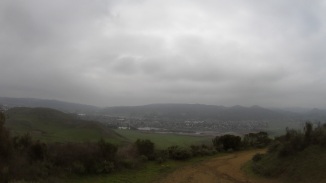 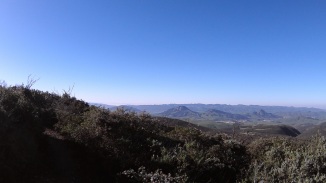 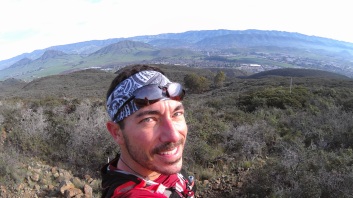 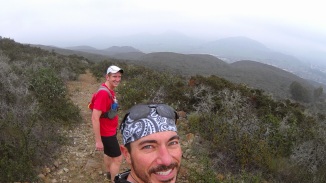 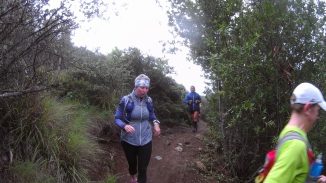 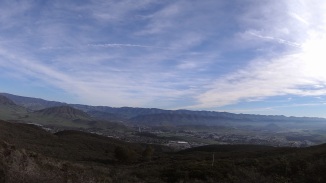 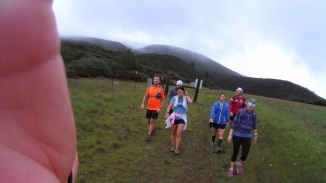 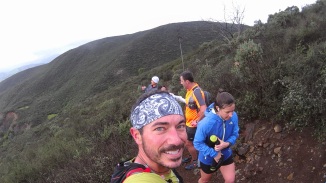 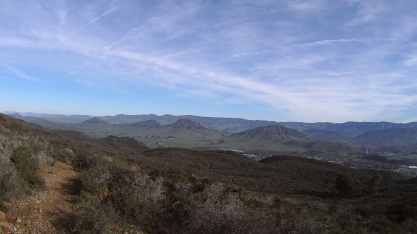 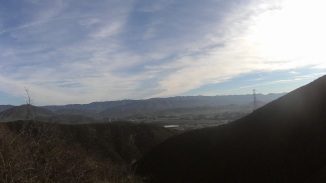 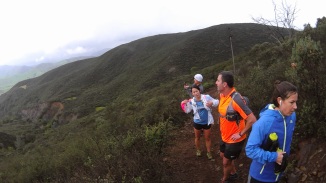 “If you’re interested in a humbling experience or just plain want to get your ass handed to you, I’ve got just the race for ya!”

I’m writing the beginning of this blog while sitting near the top of Gibraltar Rd. in Santa Barbara, watching a beautiful sunset, preparing for my first race post HURT.

Partially because I felt gutted after racing 8 ultras in 2014, mainly because I wanted to spend some free weekends enjoying the Central Coast with Alejandra and Carly, and somewhat because the chafing from ass-to-ankle looked like I had worn out my season pass to “The Sandpaper Amusement Park,” I decided to take a month off of training after we returned from Hawaii. Not setting the alarm for 5:00am on the weekends, biking into downtown for coffee on Sunday mornings and being able to volunteer at Rancho San Juan definitely helped to recharge the batteries after nearly two years of training and racing.

Jumping back on the horse in late February, I knew there wouldn’t be much time to prepare for Nine Trails, but thankfully there’s not much one can do to prepare for this damn race. After work on Friday I headed down to Santa Barbara to check in for the race, munch on some great Mexican food and scope out a prime location to car camp for the night.

Considering the Mexican food in San Luis Obispo is “Gringo Approved” at best, I was excited to try out the local fare in Santa Barbara. Luis sent out an email for an informal pre-race dinner, and considering the comida that his sister throws down at the Allwedoisrun events, I trusted that his recommendation for Las Agaves wouldn’t disappoint. If you haven’t made your way down to this taqueria/restaurant on Milpas St. in SB, please do. The food was excellent and I can vouch for everything except the hot sauce. Now there’s not much I won’t eat or drink the night before a race, and I love my food retardedly spicy 99% of the time, but please trust me to stick with the mild-to-medium salsa before a race. Unfortunately, Luis doesn’t provide wet wipes with the bib numbers…

After catching up with some fellow Dirtbags and meeting Tony Miller from the PhysioPhyx team, I headed up to Gibraltar Road to stake out some prime real estate for the evening. Luis and his caravan arrived shortly after, and we spent the next 30 minutes helping set up the 9 mile/27 mile aid station. I knew we were in great hands when I saw the volunteer crew of Crista, Peter, Michelle, Bobby, Chris Rios and Beverly show up. Also knowing that we had Chris Norling, John Vanderpot and Luis racing the next morning, I was confident there wouldn’t be too much Fireball being passed around.

We hung out under the Escobar’s extra-large canopy for the remainder of the evening sharing stories, petting their awesome Corgi with nubs for legs, and having a few beers. I started to get nervous watching Luis deny Rios’ offering of cerveza, as I’ve heard the horror stories of this race. Did Luis know something I didn’t? He’s hydrating the night before this “relatively short” 35 mile race. Should I put my beer down… My fears were allayed when we found out that Luis was nursing a solid hangover from the night before.

I hit the sack early, as I had just returned from a work trip to Baltimore and sorely needed to catch up on some Z’s. Sleeping soundly like a log, it normally takes an act of God to wake me up, and being rolled into the side of your car against your will is a great way to do it at 2:00am! The wind was absolutely howling in the middle of the night, moving my car back and forth like a cat playing with a dead mouse, and enough to upend Luis’ canopy that we had anchored down with heavy stakes only a few hours earlier. After helping to salvage our aid station, I tried to get back to sleep for a few minutes before our 4:45 wake up call.

Hustling down to the start location, Nine Trails begins at the water treatment plant on San Rocque road. There is little parking available, so I had planned on parking down the hill and catching a ride by another of the awesome volunteers offering their time to assist at the crack of dawn. Not sure if it was the windy road, the back-and-forth of the 2:00am wind party, Los Agaves’ pre-race feast or a combination of the three, but I had to stop to “fertilize” Santa Barbara’s beautiful landscape multiple times before sunrise.

Not entirely sure where to meet our shuttle, I knew I’d found the location spotting the countless 50/100 mile stickers on the back of multiple cars. With shorts around my ankles and lubing up all the same spots that hurt for days after HURT, Joanie’s taxi service showed up at the perfect time! Trying not to grease down her seat, it was great to see a familiar face and catch up for a few minutes before heading out for 35 miles of fun.

After checking in with Mannly, BS’ing with Jody Chase and Glenn Ohler, asking Van Mcarty if I could “borrow” his headlamp and reciting our favorite pre-race quote, “If I get lost, hurt or die… it’s my own damn fault. Amen,” we were off.

As expected, Van took off like a bat out of hell, followed closely by Bryan Toro. I attempted to stick with these guys for the first couple of miles, not because of race strategy, but because it was dark as hell and I couldn’t see a thing without leeching off Van’s headlamp. As the sun began to rise, I felt comfortable “letting” Van and Bryan pull away, along with a few others, as I tried to find a pace that was uncomfortably relaxed. Knowing we had some big climbs and a long day in the heat ahead of us, I tried my best to stave off the adrenaline rush that hits early in each race and find a pace that I could theoretically hold for the remainder of the day.

My sense of direction is poor-to-borderline-dangerous at best, but thankfully I didn’t get lost in the early miles as Sean Garbutt, Jack Rosenfield and I had some experience marking the first 9 miles (or 18 total miles as this was an out-and-back) of the trail before the 2014 race. There are two big climbs before the first aid station, with the first being a mix of technical switch backs and semi-runnable single-track. Joanie magically teleported to man the 5ish mile water-only aid station after the first big ascent. The second climb is relatively short yet nasty, with a steep grade that finally spits you out onto the pavement of Gibraltar Rd.

Pulling into the first aid station I was met by Ricardo Ramirez, a ridiculously fast So. Cal runner and Kevin Cody, who both looked incredibly strong. Forgetting to pack more than 6 GU’s as I assumed we’d have some at the aid stations (do not assume when racing an ultra), I quickly learned that Snickers would be nutrition choice for the day.

Heading down the mountain behind Gibraltar, the remaining 8ish miles before the turn would be relatively uncharted terrain, as we did encounter a bit of the Red Rock course heading down to Romero Canyon. I tried to stay relaxed on the big descent behind Gibraltar, knowing that blown quads would be a recipe for disaster on the big ass climb back up the mountain. I also spent some time trying to guestimate the number of calories in a mini-Snickers and determining how many I’d need to eat each hour to stave off from bonking.

Approximately a mile from the Romero Canyon aid station, I saw Van cruising up the big climb looking really determined. He definitely looked as if he’d learned something from his last Nine Trails experience, and I didn’t expect to see him again till the finish. Bryan followed close behind Van, with Daniel Fawcett and Claire Mellein each within striking distance. After topping off my water bottles, grabbing another handful of Snickers, saying hi to Bobby and Michelle and thanking the volunteers, I headed back up the ridiculous Romero Canyon climb.

As the elevation increased on the ascent from Romero Canyon, so did the temperature. Climbing back up from Romero and over the next 5-7 miles, I crossed paths with the rest of the field. There were mostly smiles, and a handful of “Looking goods” and “Keep it ups.” The community is what so many of us enjoy about the sport of ultrarunning, as we all suffer through these races together. Giving words of encouragement is something I love to do when out on the trails, and thankfully was able to knock these out early, as talking isn’t high on my priority list for the last few miles of a race.

Heading back up to the Gibraltor aid station at mile 27, I was able to catch Daniel and Claire. Daniel fought through some intense cramping, and was able to pull out a great finish! Claire ran the entire course without water or nutrition, absolutely blowing my mind! Pulling into the last aid station, Crista filled up my water and thankfully topped off my “just in case” soft flask, that helped to stave off cramping as the last couple of hours were hot and technical.

Following the long pavement climb up to the trailhead, there’s a steep descent, one last big climb, and then several miles of technical downhill to test the quads before spitting runners back out at the finish. Considering the technicality and steep grade throughout the course, I decided to race in Icebugs, as they performed great at Red Rock and for the first 60 miles of HURT. For what they make up in grip, they make you pay in support and cushion. A hot spot started flaring up on my right heel just entering the final technical downhill. Trying to tiptoe down the rocky descent wasn’t my cup of tea, so I bit down on my 40th Snickers of the day, and grunted through the last few miles.

It was a relief to see the water treatment plant, and made me smile thinking that I was nastier and more spent than the shit normally entering this site. After congratulating Van and Bryan on a great race, I pounded what felt like a gallon of PhysioPhyx, cracked open a cold cerveza, and relaxed for a few minutes to cheer on the other runners.

Like always, Luis and his crew of volunteers pulled off an excellent race. I didn’t believe him at first, but now completely agree with Luis that the Nine Trails 35 Mile Trail Run races like a 50 miler.